Make sure to visit the wonderful Catholic churches and chapels of San Miguel. I recently read that there are two parishes, 16 churches, one Oratorio, four chapels and one sanctuary. It has been my experience, that some of the larger ones are open daily as well as on Sundays plus during Semana Santa or Easter week. Some of the smaller ones are only open on Sundays for mass along with local festivals and important holidays like Easter.

The Parroquia de San Miguel Arcangel built in the late 17th century (the pink façade was added in 1880), San Juan de Dios, the Oratorio de St. Philip Neri where construction began in 1712 and the Templo de San Francisco from the mid-18th century are my favorites.

The Parroquia, the parish church, is one of the best-known icons of San Miguel and dominates the Jardin. It is not a cathedral. There are daily masses, weddings, baptisms and even concerts at times. Its original structure was completed at the end of the 17th century. Work commenced on the new façade that is seen today in 1880.

Next to the Parroquia is the San Rafael or Santa Escuela Church is located to the east side facing west. The façade is a beautiful example of Baroque architecture. In 1762, a clock was installed in the original church tower. It is the official time-keeper with its bells tolling every 15 minutes.

The Oratorio de St. Philip Neri is located facing the Plaza Civica north of the Jardin.  The Oratorio replaced an older chapel in 1712. The façade is of pink sandstone in Baroque style with profuse vegetative ornamentation. At the back there is a Baroque chamber/chapel dedicated to the Virgin of Loreto. It is richly decorated with three altars covered in gold leaf. It is the start of several of the major processions during Easter Week or Semana Santa including the funeral of Christ on Good Friday. Then Saturday brings the Procession of the Virgin of Solitude, where women carry the statue from the Oratorio in the early evening.

The San Francisco Church was begun in 1778 and was finished more than twenty years later, when architectural styles were changing. The façade is pure Churrigueresque or Spanish Baroque style with stone figures and fine columns. The later bell tower was constructed in 1799 in the Neoclassical style by architect Francisco Eduardo Tresguerras.

The small, Capilla Santa Cruz de Chorro is located up the hill from Parque Juarez at El Chorro 56 and well-worth the short climb up.

Capilla de Ojo de Agua: This small Capilla is one of the oldest in all of San Miguel. It was originally built sometime between 1590 and 1620. Cjon. Ojo de Agua just down from the Salida de Querétaro in Valle del Maiz. Up the hill is another small chapel, Capilla Xichu or Capilla Valle del Maiz. They both have an active fiesta schedule throughout the year. I can attest to that, as I can hear the fireworks in the mornings during of the festivities.

Capilla de la Virgen de los Dolores: This is a small chapel on Piedras Chinas between the Mirador on Salida a  Querétaro and El Chorro.

Capilla de Guadiana on Cjon de Las Moras is a small chapel near the corner of Calle Guadiana. I enjoy walking by several times a week on my way to and from my house.

La Parroquia de San Antonio de Padua is one of my favorites and is located in the San Antonio neighborhood just west of the Instituto Allende at Plaza San Antonio No.1. I have enjoyed going to the candlelight outdoor mass on the Saturday night before Easter. It is also the starting point for the Fiesta de los Locos or Locos Parade held on the weekend nearest June 13 or the feast day of St. Anthony. It is the best place to go and see the costumes and masks prior to the start of the parade that heads downtown.

Templo de Santo Domingo is located at the top of Correo and the Salida Real a Querétaro.

Templo de San Juan de Dios is one my favorites. Located west of the Jardin, it was established in 1770. A hospital was built next door which is now a school. During Semana Santa, it becomes home to the famed statue of Our Lord of the Column or Señor de la Columna which is brought in an overnight procession from the Sanctuary of Atotonilco. On Wednesday of Semana Santa or Easter week, one of my favorite local events is at San Juan de Dios where the statue of Señor de la Columna is brought out again in late afternoon and paraded through the neighborhood. The children in the procession are so precious!

The Church of the Immaculate Conception/Templo de la Purísima Concepción is known locally as Las Monjas or “The Nuns “. Originally built as part of an extensive housing complex, it is currently a convent for nuns of the order of the Immaculate Conception. The church was built between 1755 and 1842, and the elegant dome or cupola was added by Don Zeferino Gutiérrez in 1891. Again based its construction on a historic European site, the church of The Invalids in Paris. Canal 23.

The Chapel without a name or Chapel sin Nombre at Del Obraje 4 is a small chapel near the Live Aqua Urban Resort.

Sosnabar is a small village outside of San Miguel to the southeast. The Iglesia Cathólica de Sosnabar is located in the middle of the town.

A short distance away is Jalpa where I enjoyed seeing the Iglesia de Jalpa.

A short distance outside of town and west of the train station, is San Miguel de Viejo. This is a small chapel built near the site of the original settlement of San Miguel. Most scholars agree that it was not the original chapel, but was built between 1720 and 1730.

The Santuario de Atotonilco, or Mexican Sistine Chapel as it is known, is a church complex and an UNESCO World Heritage Site just outside of San Miguel de Allende.

Construction of the complex started in 1740 by Father Luis Felipe Neri de Alfaro who, according to tradition, was called upon by a vision of Jesus with a crown of thorns on his head and carrying a cross. The main feature, and why you should visit, is the wonderful Mexican Baroque mural work that adorns the main nave and chapels. The paintings have a definite indigenous influence. This was chiefly the work of Antonio Martinez de Pocasangre over a period of thirty years. 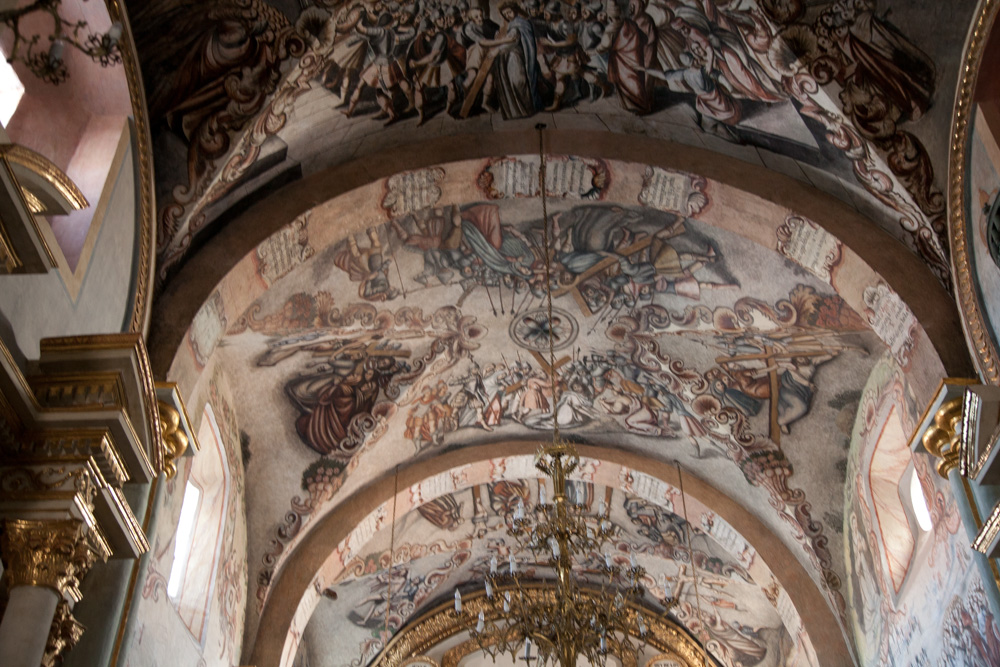 One thought on “The Chapels and Churches In and Near San Miguel de Allende, MX”